The city of Tokyo’s identity spans century upon century of rich traditions, revered landmarks, and peaceful retreats. The celebrated temples, cathedrals, shrines, and gardens communicate sentiments of peace in their own unique ways. Enjoy a stroll through the lush greenery of Tokyo's garden grounds, discover spiritual knowledge within Buddhist temples, or connect with history in majestic shrines.

1. SENSOJI TEMPLE One of Tokyo’s most heralded temples, Sensoji, resides within the city’s traditional Asakusa neighborhood. Enjoy wandering through the city’s premier Buddhist temple, constructed back in the 7th century, and arrive early to avoid lengthy wait times. 2. HAMA-RIKYU GARDEN Connect with nature’s tranquility at the ancient Hama-rikyu Garden, with lush greenery that extends into the area that is host to Tokyo’s most notable fish market, Tsukiji. The grounds boast a sprawling duck pond; a tea pavilion; and varieties of trees including black pine, Japanese apricot, and more, with many aged over 100 years. 3. NOGI-JINJA SHRINE Built in honor of General Nogi Maresuke, notable war hero during the Russo-Japanese War, the Nogi-jinja shrine is situated just down the hill from his residence, which is open to the public on September 12-13 each year. You are also welcome to enjoy an antique market on the grounds, featured on the final Sunday of each month. 4. IMPERIAL PALACE AND EAST GARDEN Situated upon the site of Edo-jo, Tokyo’s original castle, the Imperial Palace is now host to the empreror of Japan and members of the imperial family. You can enjoy a tour of the grounds for a small fee, which showcases two notable bridges, the Niju-bashi and Megane-bashi, as well as the resplendent East Garden area.
5. NIKOLAI CATHEDRAL Nikolai Cathedral showcases a bit of Byzantine architecture within Tokyo, and takes its name from St. Nikolai of Japan, who helmed the efforts of the Russian consulate in nearby Hakodate. Constructed in 1891, the cathedral features a majestic copper dome inside. 6. ZOJO-JI TEMPLE One of the most notable of Buddhist temples, Zojo-ji, was built back in 1693. Its towering gate, known as Sangedatsumon, was constructed in 1605, and depicts the three phases of achieving nirvana. Roam the grounds at your leisure, or marvel at the statues of Jizo, a notable spiritual figure, as well as a Himalayan cedar tree planted by Ulysses S. Grant in 1879.
7. RIKUGI-EN GARGEN 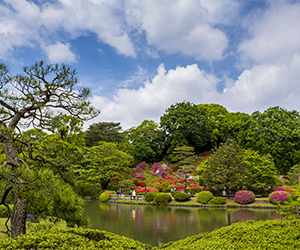 Touted as one of Tokyo’s most heralded gardens,
Rikugi-en takes its inspired design from ancient, traditional poems, and was constructed back in 1702. After you stroll through the grounds, sip a cup of matcha from the garden’s teahouse, with an unbeatable view overlooking the peaceful garden pond.

8. SENGAKU-JI TEMPLE The Sengaku-ji temple stands in honor of the fabled tale of the masterless samurai, or ronin. Here, the scent of incense fills the temple, with a tranquility to instill reverence in its visitors. An exhibit awaits as well, which depicts the tale of the samurai in its entirety for guests. 9. MEGURO FUDSON TEMPLE At the Tendai-sect Meguro Fudoson temple, otherwise known as Ryusen-ji, travelers can experience an ancient fire ritual held several times throughout the month within the main hall. The temple is host to the grave of notable Japanese scientist Konyo Aoki, who pioneered the growth of sweet potato production within the country. Yearly, this site features an annual sweet potato festival in his honor.